If you want to get in touch, drop us an email at admin@ourhouseourhome.co.uk

It's always summer in sunny Florida so why not visit Disney, and stay at a Disney Timeshare Resort? But not everyone is all about hot climates so check out Wyndham Timeshare Resorts for locations all over the world. 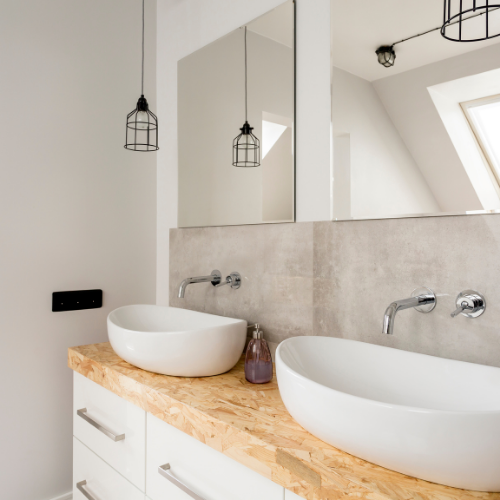 When it comes to adding value to your property, the experts in property development will agree that investing in the bathroom and kitchen almost certainly guarantees profitable returns.

If you’re considering making your home appealing to potential buyers, then one of the first places to start is in the bathroom. With countless accessories and appliances on the market, making a decision that will ultimately allow you to reap the rewards is daunting.

When it comes to bathroom design, what is it that most people really want? Would choosing a spacious whirlpool bath above a traditional bath be financially beneficial in the long haul?

Wouldn’t designing your bathroom be a much easier task if you were armed with a guideline of what tickled the fancy of potential homebuyers? If you’re going to design your bathroom get it right the first time round to avoid flushing away hard-earned pounds.

From as far back as the 1960s much focus was placed on bold colours in the bathroom. Patterned wall tiles of nautical creatures and over-the-top colors were the trend, along with plastic. Plastic bathroom décor was the craze, from bold orange, olive green, mustard yellow, and chocolate brown coloured toothbrush, soap, and towel holders, to thick patterned plastic shower curtains that screamed colours of the boldest nature.

As the times moved on, the 1970s and early 1980s became a period when gold bathroom fixings and furnishings, such as taps, towel rails, and toilet roll holders, were considered very stylish. These ostentatious gold-trimmed features were all the rage, and bathroom décor was ‘loud’. Added to this were those once delightful bathroom suites in colours avocado, coral pink, and chocolate brown. Bathroom colour has changed dramatically over the past decade, and shades have become more neutral, sometimes with a hint of colour that adds a complementary vigor to the overall scheme.

Of the many hundreds of people who took part in Plumbworld’s recent bathroom survey, an overwhelming 82 percent said they “hated” the once glorified avocado and coral pink bathroom suites, colours remnant of 1970s and 1980s, which are typically characterised as being dark and dull.

According to the survey, chrome bathroom taps were much preferred to gold.

So, when designing and decorating your bathroom keep those dark colours at bay, consider white suites, and opt for chrome fixings and furnishings instead of flashy gold. If you stick to neutral for things such as tiles and the bath etc, you can add an impact with the accesories. This also means as potential buyers come in, they can change these accessories to suit their taste.

When planning the design of your bathroom, one of the most important aspects to consider is placing a shower. Some bathrooms don’t have adequate space to include a shower cubicle, so assess your options. Consider installing a shower over the bath if space is limited.

The survey showed that 94 percent of its participants believed that a shower in a bathroom was very important, and 81 percent said they preferred a separate shower enclosure in a large bathroom. Almost 65 percent said their ideal would be a power shower, while 27 percent preferred mixer showers, and only 12 percent opted for electric showers.

The survey revealed that close to 53 percent of its participants were not phased by them, while only a small 38 percent of participants “loved” them. Surprisingly, 62 percent said they had “no strong view” towards corner baths either, which means the traditional rectangular baths still hold clout against their spruced up counter parts.

Try to avoid the urge to place carpets on the bathroom floor, according to the survey it is not too favoured. The survey showed that the preferred floor covering was tiled, with 75 percent saying they “loved” a tiled bathroom floor. Popular vinyl flooring has not yet lost its place in the bathroom, with more than 61 percent saying they didn’t have any strong likes or dislikes towards it.

When choosing your bathroom flooring, tiles are the favoured option, but if the budget is tight, then vinyl flooring won’t let you down.
Apart from the flooring, make sure your windows look appealing. When it comes to dressing your bathroom windows, steer clear of those bathroom nets and fabric curtains. The survey showed that 94 percent said they favoured blinds in the bathroom to curtains.

If you want to get in touch, drop us an email at admin@ourhouseourhome.co.uk

It's always summer in sunny Florida so why not visit Disney, and stay at a Disney Timeshare Resort? But not everyone is all about hot climates so check out Wyndham Timeshare Resorts for locations all over the world.

This website uses cookies to improve your experience while you navigate through the website. Out of these cookies, the cookies that are categorized as necessary are stored on your browser as they are essential for the working of basic functionalities of the website. We also use third-party cookies that help us analyze and understand how you use this website. These cookies will be stored in your browser only with your consent. You also have the option to opt-out of these cookies. But opting out of some of these cookies may have an effect on your browsing experience.
Necessary Always Enabled
Necessary cookies are absolutely essential for the website to function properly. This category only includes cookies that ensures basic functionalities and security features of the website. These cookies do not store any personal information.
Non-necessary
Any cookies that may not be particularly necessary for the website to function and is used specifically to collect user personal data via analytics, ads, other embedded contents are termed as non-necessary cookies. It is mandatory to procure user consent prior to running these cookies on your website.
SAVE & ACCEPT